Alexandra Chiriac is a third year PhD candidate at the University of St Andrews, funded through the SGSAH AHRC Doctoral Training Partnership. She is researching the impact of modernism on stage design and interior design in Romania in the 1920s and 30s. She holds an MA in Art History from the Courtauld Institute of Art and has previously worked for Sotheby’s and for GRAD, a non-profit cultural platform for Russian and Eastern European arts. You can find out more about her work at www.alexandrachiriac.co.uk and follow her on Twitter @arthistorynomad.

Listening to a philosophy scholar from India speaking to a group of 18-year olds on the top of a Romanian mountain is probably not a very common occurrence, but that is not the reason I felt compelled to pull out a pencil and paper and take copious notes one recent June morning. As PhD students, we frequently have impressed upon us the importance of impact and engagement, yet no amount of training in these esoteric areas can replace witnessing good practice in action.

But first, some words on how I came to be part of this fascinating encounter. At the invitation of an artist friend, I swapped my usual desk at the university library for ten days in the Romanian spa town of Slănic Moldova, hoping for some write-up inspiration. It was my second visit to this peaceful mountain spot where my talented friend Alina 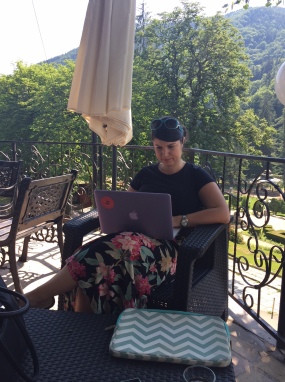 Teodorescu has been organising artistic residencies that actively engage with the local community. The In Context project (www.incontext.art/en) is an annual collaboration with artists from different countries which results not only in an exhibition, but also in many activities that can truly be described as impactful in conditions that are perhaps challenging. Not only are the cultural and language barriers to be considered, but also the practices of contemporary art which can be impenetrable to many of us, and even more so to a community not frequently exposed to them. As a researcher, I frequently wonder how I can make my work more accessible and this was an eye-opening experience. In these Romanian woodlands, I was out of the library not only physically but also mentally and witnessed the daily interactions of the residency participants with the local community. This year, the group consisted of Indian artists and thinkers active in several disciplines, including sound & music, choreography, philosophy, literature and the fine arts, as well as two Romanian artists. Teodorescu, who is from Slănic Moldova, engineered multiple opportunities for engagement, such as art and movement workshops for different age groups, an oral history project, recordings of the local soundscape, and encounters between artists and local craftspeople.

For me, the most thought-provoking event was the lecture given by Prabodh Parikh, an

award-winning poet, artist and philosopher who has been a fellow at the Sorbonne and the University of Liverpool and is currently Faculty-in-Charge of International Art, Literature and Culture at the Whistling Woods Film School in Mumbai. He spoke to a group of 18 year-olds from the local high-school about Rabindranath Tagore, the Bengali thinker, Nobel-winning writer and artist, a topic that could easily become overly academic. Yet Parikh spoke with ease and charm, permanently gaging the understanding of his audience and stripping his narrative of unnecessary facts. I was compelled to note down some of his techniques, in the hope that I may be able to introduce them in my own presentations:

The talk ended with a poetry reading by Dr Mitra Mukherjee-Parikh, a scholar of literary

modernism and translator. She read a Tagore poem in both the original Bengali and in English translation, selecting one that relayed a conversation between a grandfather and a grandchild. As well as evidently selecting the poem for its intended audience, Dr Mukherjee-Parikh provided a simple context to the poem at first and then read it with a clarity and expressiveness that kept her young listeners rapt. Tagore’s grandfather says he is ‘trapped in [his] work like a spider-webbed fly’, a feeling that I am sure is familiar to many a PhD student. But, as I found out, some fresh air, a picturesque location and open-ended conversations with one’s audience can tear the cobwebs away.

In Context is a residency programme in Slănic Moldova, Romania, that aims to inspire contemporary artists to develop their practice and create work in non-studio and non-gallery spaces, through engaging with new geographies, audiences and socio-economic contexts. For more information see http://www.incontext.art/en, @artinslanic on Facebook and @incontext_slanicmoldova on Instagram.

We are always seeking new guest bloggers! If you have an idea for a blog post or would like to informally discuss writing for the SGSAH blog please get in touch with David via email at d.peters.2@research.gla.ac.uk or connect with the blog on Twitter

One thought on “Impact in Context: Lessons in Engagement from a Romanian Mountain Top”