This week’s guest blog comes from Jennifer Thatcher, a 2nd year, SGSAH-funded PhD candidate at Edinburgh College of Art. She also writes regularly for art magazines, including Art Monthly, ARTNews and ArtReview. You can read more about her work at https://www.sgsah.ac.uk/research/ahrc17-18/headline_563098_en.html and https://www.eca.ed.ac.uk/profile/jennifer-thatcher.

‘Is it normal for the pipes in my room to whine constantly?’ I asked at the reception desk. ‘You mean like, “wheeeeeeeeee”?’ the manager answered. ‘Yes.’

The charmingly eccentric Jane Hotel was my base for a 16-night research trip to New York this January. The opulent, retro décor and surreal accents (an anticlockwise clock) of the lobby and ballroom bar reminded me of The Grand Budapest Hotel, especially with the staff dressed in Nehru-style jackets and caps. That the building was once a hotel for sailors, even housing survivors of the Titanic, explains the cabin-like rooms whose only furniture is a narrow bed. Most importantly, it is cheap; ideal, the hotel website proudly proclaims, for ‘house guests with more dash than cash’. The location is a particular draw: it’s at the north end of the atmospheric West Village, with its cinematic brownstone buildings, and just south of the Meatpacking District, whose attractions include the Renzo Piano-designed Whitney Museum of American Art, the High Line and foodie heaven, Chelsea Market.

I was here (thanks to SGSAH student development funding) to visit the archives of the New York-based art magazines Avalanche, BOMB and index, as well as to meet some of the artists and editors involved. These magazines were largely comprised of interviews, the development of the ‘artist interview’ over the 20th century being the subject of my PhD. My first stop was the Museum of Modern Art (MoMA) archive. American archives are generally very comprehensively catalogued and require researchers to use ‘finding aids’ to specify file numbers in advance. Yet it still feels like a school exam arriving at an archive for the first time and apprehensively opening the boxes, hoping for some unexpected treasures. MoMA is, rather unhelpfully, only open from 1 to 5pm, so I decided the best use of my limited time was to photograph as many documents as possible (380 according to my computer), writing a few notes alongside to capture my initial impressions. 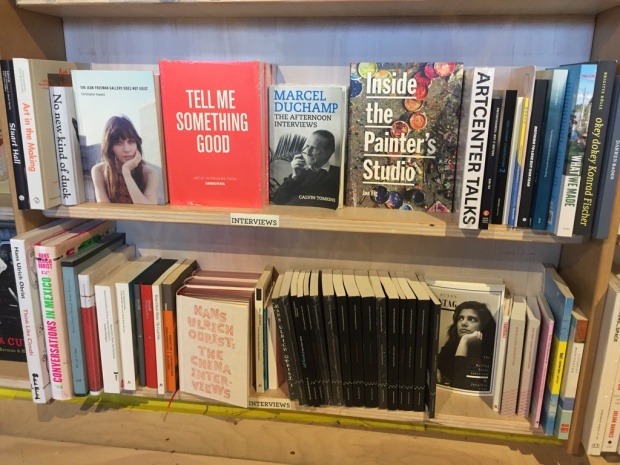 In my research, I have been comparing drafts of interview transcriptions with their final published versions: noting what has been edited out, amended or corrected, and any clues as to why. The Avalanche magazine papers at MoMA confirmed that those interviews had been heavily edited, the original transcript often at least twice the length of the published version. And this from a magazine whose interviews included numerous ‘hmmm’s and ‘huh’s to give the illusion of authentic, ‘natural’ speech.

The three magazines I was researching all identified with the bohemian New York downtown scene of the 1960s until 1990s, when creative folk could live and work cheaply – and often illegally – in industrial building lofts (now repurposed as luxury boutiques and health clubs). The magazines’ interviewees, like their readers, were the contributors’ peers and friends: young, aspirational artists. Thus, the recorded conversations, as captured in the full-length, original transcripts, were often unguarded in their references to drugs, sex and gossip. I felt a bit voyeuristic reading about an artist’s extra-marital affairs, for example. index magazine, whose archive is based in the Chelsea studio of publisher and artist Peter Halley, promoted many then-unknown photographers. Among these is the now-notorious Terry Richardson. How did Peter feel about Terry in the wake of Me Too allegations against him? I dared myself to ask. It is hard not to feel emotionally connected to the interviewees. Reading the BOMB magazine archive, housed at Columbia University, I was saddened to realise how many contributors had died in their prime, many of AIDS-related complications.

Part of the thrill of visiting archives is often the buildings themselves. In preparation for my trip, I watched Ex Libris (2017), a fly-on-the-wall documentary celebrating the democratic principles of the New York Public Library. Consulting the index magazine collection in the cathedral-like research room of the library’s iconic Stephen Schwartzman Building on Fifth Avenue, it was pleasing to find that the place was as inclusive and welcoming as it had appeared in the film (unlike all the other archives, you aren’t obliged to check in your bag and coat). The Morgan Library, the original neo-classical building supplemented by a steel-and-glass piazza (like the Whitney, by Renzo Piano), was another architectural highlight. There, I explored the archives of The Paris Review, a literary magazine, originally funded by the CIA, which developed the model of the interview as a ‘dramatic form in itself’, according to its editor.

By serendipity, many of the exhibitions at New York’s art galleries related to the downtown scene I had been reading about, including Andy Warhol at the Whitney, Judson Dance Theater at MoMA, Martha Rosler at the Jewish Museum and Robert Mapplethorpe at the Guggenheim. I also booked an appointment to view the late Donald Judd’s live-work space, a five-story cast iron building in downtown SoHo – preserved as he left it on his death in 1994. With no photos allowed, and an enforced 90-minute guided tour, it was a welcome opportunity to slow down and appreciate my surroundings without the panic of having to document them.

Back in my room at night, I took to watching episodes of The Marvellous Mrs Maisel, a comedy series set in 1950s New York, in which a frustrated upper-middle-class housewife embarks on a clandestine stand-up career downtown. Coincidentally, my husband was watching it back in the UK and was able to describe the Columbia University campus I was visiting, since it was where Mrs Maisel’s father worked as a professor. On a bargain bookstand near Columbia, I also picked up the hugely entertaining memoires of American humourist David Sedaris, Me Talk Pretty Someday, in which he describes the drug-addled, avant-garde performances he did as a young artist at the Whitney in the 1980s (to which he had, ill-advisedly, invited his mum). Sedaris had been interviewed by index magazine, so there was a connection too.

By the end of my trip, my brain was giddy with trying to make connections between all the people and places I was coming across. As I walked my way around New York, taking a different route each day, I was also starting to feel oddly nostalgic for a bohemian era I had never lived through myself.