Clare Brown recently visited South Africa and Malawi as part of her research into the use of visual images and imagery in 19th Century Christian mission to southern Africa. Whilst there she kept a regular blog of her experiences, a selection of which you can read below.

“Ethiopia shall soon stretch out her hands unto God.” Psalm 68:31b

This verse from Psalms was popularly used by Victorian missionaries to justify their activities across Africa. It implied that the divine will was for Africa to be encompassed within the care of their God, and also that Africa itself had a desire to know and participate in the Judeo-Christian God. The map of ‘Africa 1803’ below indicates the sketchiness of early missionary knowledge of the African continent, and that this contributed to a particular interpretation of scriptural references to ‘Ethiopia’ as a generic term for a considerable portion of it. 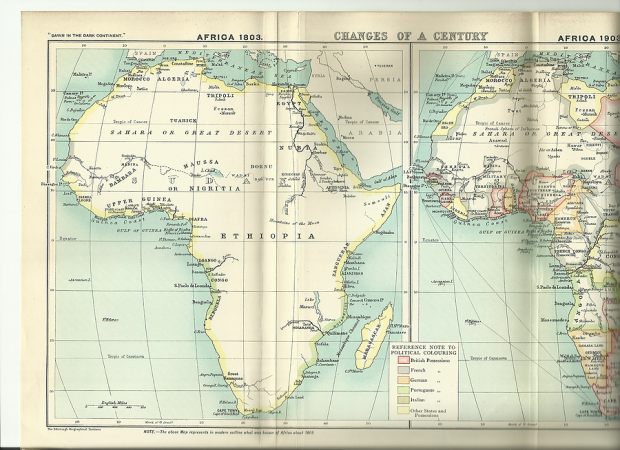 As I prepare to travel to South Africa and Malawi, researching the history of visual art and imagery in missionary identity and practice, I follow some of the same geographical paths as those missionary pioneers. The knowledge and aims I take with me, however, are very different. I am mindful of the challenges and possibilities of post-colonial Africa, and hope my cultural sensitivity as well as my academic rigour prove adequate in the research I undertake.

And of course, as well as the serious matters, I am about to spend a month travelling to new places, meeting new people and (hopefully) having some fun along the way.

“Martin Dowery: Sexy.” If only we could all sign our names so confidently … Aside from the chuckle this little gem elicited (and yes, I know, he was the secretary, and probably not sexy at all), yesterday was the sort of archive day I had been anticipating. Lots of trawling through card catalogues, reams of reference numbers for items that I’m slowly working through with little to show for it so far. Still, four more days to hope for a Eureka! moment.

In other news, I now have a hire car to get me between my B&B in Port Alfred, and Rhodes University at Grahamstown. It’s quite fun pootling along, catching up with all the essential sports news on Radio 2000 and marvelling at the large cactuses and brightly coloured birds at the sides of the road. What’s less enjoyable is having to drive past scores of people trying to hitch lifts, feeling unconscionably privileged and rude as I whizz by with four empty seats. I will follow all the advice I’ve been given and not stop, but that doesn’t mean I like it.

On a lighter note, I stopped for my dinner last night at the Pig & Whistle pub in Bathurst, conveniently situated between Grahamstown and Port Alfred. It’s an old settler village, and the pub itself dates from about 1820, with the honour of being the oldest continuously licensed pub in South Africa, apparently. It happened to be steak night, which involved selecting a cut from a trestle table piled up with chunks of cow, cooked in front of you and supplemented with side orders of chips, sauces & accompaniments. My sirloin steak and sides, with a drink, set me back about R56. This didn’t seem quite right, but a quick check on the currency converter app confirmed that the meal had cost me £2.91. I wonder what’s on the menu tonight!

Notes from ‘the warm heart of Africa’

Sitting here in the elusive wifi cafe in Mzuzu, Malawi, I can’t think where to start. My plan of regular, if not quite daily, posts seemed straightforward. Trying to capture five days in a couple of paragraphs feels rather harder – but here goes!

An early start on Monday took me from Cape Town airport to Johannesburg, where I was to transfer onto a light to Lilongwe, Malawi. In theory this was simple, however the travel agent who booked my flights seems not to have realised that the two airlines don’t have a luggage transfer agreement, and an hour and a half between flights is pretty tight for disembarking, collecting baggage, running madly through a large and unfamiliar airport, checking baggage back in, clearing security and making a dash for the furthest-flung boarding gate. Amazingly, I made it, though I was regretting the flip-flops, which do not make good running gear.

So at last I was officially in Malawi, and was met by my ‘fixer’ contact as arranged. Phew! The sigh of relief was short-lived, however, as the fixer had fixed a transport package completely unsuitable for a student whose travel bursary had long since been spent and whose pockets were now decidedly shallow. I’ll spare you the painful details, but I eventually managed to extricate myself from the arrangement, and bought a bus ticket instead. At this point, I was actually more tempted to turn around and fly home. Only I couldn’t afford it …

View from the gust house window

After a rocky couple of days, and a bumpy 5+ hour bus ride, I arrived in Mzuzu on Wednesday. Here, I have been admirably looked after by the General Secretary of the Church of Central Africa Presbytery, Livingstonia Synod (or GS!), and his wife, and slowly acclimatising to Malawian life. Tangible research progress is scant so far, but I’m hoping for some good material at my next stop – Livingstonia.

In Malawi, I’ve found that everything takes a little longer than I expect, and also that a lot of time is spent waiting. For people, transport, or nothing much in particular. So really, I shouldn’t have been surprised that the 10 hour bus trip from Mzuzu to Blantyre took very nearly 12 hours. To add to the experience, the coach had no toilet, seats narrower than any normal human adult, and loud gospel music piped on an endless loop. All night. Amazingly, I did manage to get some sleep and in a way was grateful to arrive at 7am rather than 5. Goodness knows how I would have spent the time before the city woke up. Waiting, I suppose.

Fortunately, I was able to get straight into the room in my accommodation before 8 o’clock, freshen up and be ready to hit the streets of Blantyre for my whistlestop tour by 9. I started with Mandala House (pictured). Built in 1882, this is the oldest building in Malawi, and was originally the African headquarters of the African Lakes Company. Now it houses a craft shop, art gallery and cafe downstairs, and upstairs is the premises of The Society of Malawi. As the banner proclaims, the society has a library open to visitors, and this proved to be a treasure trove of resources on Malawian history, missionaries included. I spent several hours desperately skimming through books, and wishing I had a few days to pore over their contents. Still, I think some useful material has come out of it. And the cafe does a good pot of tea, too!

A late afternoon foray to find the impressive St Michael and All Angel’s Church was less successful, as I completely failed to find it. In my defence, the street it is supposedly on was awash with soldiers and armed police, which was slightly off-putting. This was presumably in connection with student protests at the University of Malawi’s recent huge fee hikes, but I didn’t witness any protestors at all. Maybe they were put off too. Nonetheless, I’m pleased to have made the trek to Blantyre, and to add to my to-do list for the next visit!

Clare Brown is a third year PhD researcher in Theology, Literature and the Arts at the University of Glasgow. She studied Philosophy and Theology as an undergraduate at the University of St Andrews, before spending a number of years working in the voluntary sector. She returned to academia to gain an MA in Biblical Studies from the University of Sheffield in 2013. Her current research is into the role of visual imagery in the evangelical work of British missionaries to southern Africa during the Victorian period, including the uses and effects of illustrated print materials, ecclesial art, and magic lantern slides.