Hello fellow PhDers! I’m literally falling over myself trying to get through my to do list this week (having such issue with settling back to work post-Christmas, ugh!) and as such I’ve decided to share a blog from my website instead of writing a new one. BUT it’s relevant, since Zootropolis (aka Zootopia) just won best animated feature at the Golden Globes, yay! (even though I also loved Moana…but that’s a different blog post.) Back to business as usual next week, I 100% promise!

Yesterday I went to see Disney’s latest offering, Zootropolis, set in a world where anthropomorphic animals rule with not a human in sight. Guyyyyyyyyys! It was really great. So I figured, since I’m passing this little cinema sojourn off as research I’d better share some of my thoughts on the film in the context of my PhD (for those of you who have forgotten/just don’t know, I’m studying talking animals in poetry). I’m aiming to keep spoilers to an abso minimum, but apologies if there are any. Also the accompanying picture is an actual still from the film that Disney sent me because they knew I was writing this blog.

The general story of Zootropolis goes: animals have evolved to a point where prey and predators live in complete harmony, within human-type cities, where they drive cars, wear clothes and speak perfect American-English. We follow the story of Judy Hopps, a bunny from the country who wants to be the first rabbit police officer, but LOL bunnies can’t be cops, can they?! (SPOILER) Well, as we see during the course of a handy training school montage, yes. they. can.

So while all the animals pretend that they’re bffs, there’s still some very clear animosity towards foxes, who are characterised as sneaky, treacherous, mean and violent, and apparently, out of all the other predators (including but not limited to, tigers, lions and wolves), are the most likely to break the sacred bond of trust made with prey animals in order to guzzle down a lamb or two. So OF COURSE Juddy Hopps is going to have to befriend a fox in order to succeed in her adventure. Enter Nick P. Wilde, a smooth talking hustler perfectly voiced by Jason Bateman. 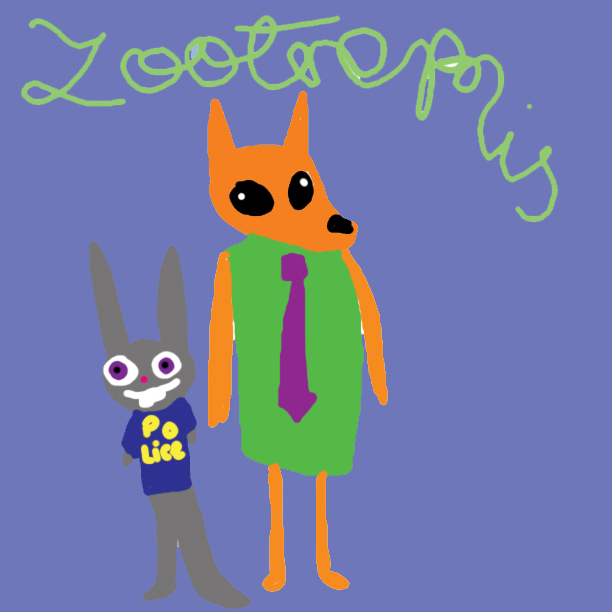 This raw deal for foxes seems to hark back to the medieval bestiaries, where foxes are portrayed as devious lad pals of Satan who pretended to be dead in order to lure birds into their mouths – a trope that has been handed down through fables and fairy tales and is still fairly pertinent today. BUT what’s nice about this film is the shattering of these dull illusions to show that foxes ARE a-okay and deserve respect, just like all the other animals. Really, that seems to be the take home message of the whole film – be kind to others and treat everyone the same. GOOD WORK, DISNEY, making us all reevaluate our treatment of any number of political issues including but not limited to race, gender and religion by forcing us to see ourselves in these little animal dudes!

So yeah, I’ve been reading a lot lately about the “sympathetic imagination” and the ways animals can be used to activate this facet to provoke empathy and compassion in humans. I will (poorly) elaborate on this in the following few lines: The fact that there are zero humans in this film is great, because it means the audience has to put themselves in the position of the animal, therefore subconsciously eliciting more respect for animals and their feelings as living beings. At the same time the sympathetic imagination allows us to overlay the message behind the movie onto other aspects of our lives – if we follow Judy Hopps’s example of positive attitude + helpful demeanor everything will work out in our favour (that’s kind of a spoiler, but this is Disney, I’m sure you saw it coming so no complaints).

Interestingly there were no domestic animals featured in this film, i.e. cats and dogs, and I couldn’t quite figure out why. Maybe because IRL pets (cats and dogs in particks) bridge the gap between humans and animals so we don’t want to see them in predator/prey situations? Or maybe the idea of dogs and cats fending for themselves (without our benevolent intervention) isn’t quite so appealing as a rabbit and a fox getting shit done and makin’ it work?

Anyway, this is now really long and even though I have 2 more pages of notes, I’ll stop. If anyone else has seen this movie and would like to discuss it, I am MORE than willing to go into way too much detail (I had a whole section on the self-referential nature of Disney, but I’ll save that for another day.) Oh also, if you like Disney in general, be sure to check out Me3 Comedy’s podcast It Disney Matter (It Does) by clicking here (basically me and my comedy/life partner Richard Hanrahan discussing Disney movies with a comedy edge).

Remember – if you’d like to share any aspect of your research here on the SGSAH blog, please don’t hesitate to get in touch. Email us here: admin@sgsah.ac.uk. You can also follow us on Twitter and like us on Facebook for regular updates about what’s going on at the Scottish Graduate School for Arts & Humanities.