This post was written by Erin Farley, a second year PhD candidate at the University of Strathclyde on the Collaborative Doctoral Award project “Poetry, Song and Community in the Industrial City: Victorian Dundee,” in partnership with Dundee Central Library. Her research focuses on how the composition, performance and reception of poetry and song reflected and influenced people’s relationships with place. She has previously worked in the fields of oral history and folklore studies, and is also a traditional storyteller. She is on Twitter @aliasmacalias.

The city of Dundee is the main character in my thesis. My research looks at the many ways in which people were creating and performing poems and songs there throughout the 19th century – a body of work which covers a huge variety of forms, mediums and experiences. Verse was printed in newspapers, sold for a penny in broadside shops, sung on the streets, and they even found time to write a few books as well.  While the styles and subjects are many, and are hard to tie together, I keep coming back to the city itself as a common factor: as inspiration and as a setting for action in the writing itself, but also – obviously, but importantly – as the place in which poets lived, worked, met and wrote. It seems that poetry was amongst the stuff of daily life for Dundonians, and shaped the lived experience of the city for many. From the beginning of my PhD, I’ve been looking for ways to bring this material back into the popular consciousness of Dundee – it feels important, with the ongoing debate about which ‘national literatures’ should be taught in Scottish schools, to work in a way which acknowledges that culture is not handed down from capital cities but is built up from people and communities, working in places and influenced by all sorts of unexpected networks and path-crossings.

One of the ways I’ve found success is through leading poetry walking tours of the city: stopping at places which inspired verse by Victorian Dundonians, and performing their words, which is one of the most immediate ways to explore the connections between poetry and place. The poetry is so plentiful that routes are always suggesting themselves to me – I’ve explored Baxter Park, the Law, and the Verdant Works jute museum, as well as the city centre streets, on these walks. Leading these tours feels much more like an exploration than, say, giving a conference paper does. Even having planned the route beforehand, things like weather, traffic, and the city’s constantly changing array of building sites and roadworks affect how the tour will be experienced. They feel more like experimental essays in movement than a straightforward passing on of information.

Performing the Victorian material is often as important as reading it to get a sense of what the writers meant: much of this material was read aloud at literary groups, or declaimed by street singers, or intended as a memory aid between performances in the first place. And while the seagulls outside my window don’t seem to mind my home readings too much, it’s a whole different experience relating the words to an audience – and a two-way process as well, where people’s reactions and suggestions inform my research. Bringing my research onto the streets has allowed me to meet and work with some fantastic groups of people I might not have met otherwise, like the Stobswell Forum group who celebrate the talent in their local area with a volunteer-run festival each spring.

Although Dundee has changed the routes and names of its streets hugely since it inspired the poems I research, the city itself remains an important way of connecting with the creative traditions it has been home to over the years. Darran Anderson’s wonderful book, Imaginary Cities, explores the countless ways in which cities are shaped through our processes of creating and remembering. In Dundee, there are small time-capsule links which bring us back to past imaginations of the city: the miniature cast-iron versions of long-demolished civic buildings outside the Overgate, itself an aggressively twentieth-century shopping centre following the path of the ancient street where thousands of songs were sent out from the little printer in the back room of the Poet’s Box broadside shop. The blue plaques bearing the names of Dundee women who disrupted the expectations of society quietly disrupt our view from the side of a Gregg’s or the shadow of a close. 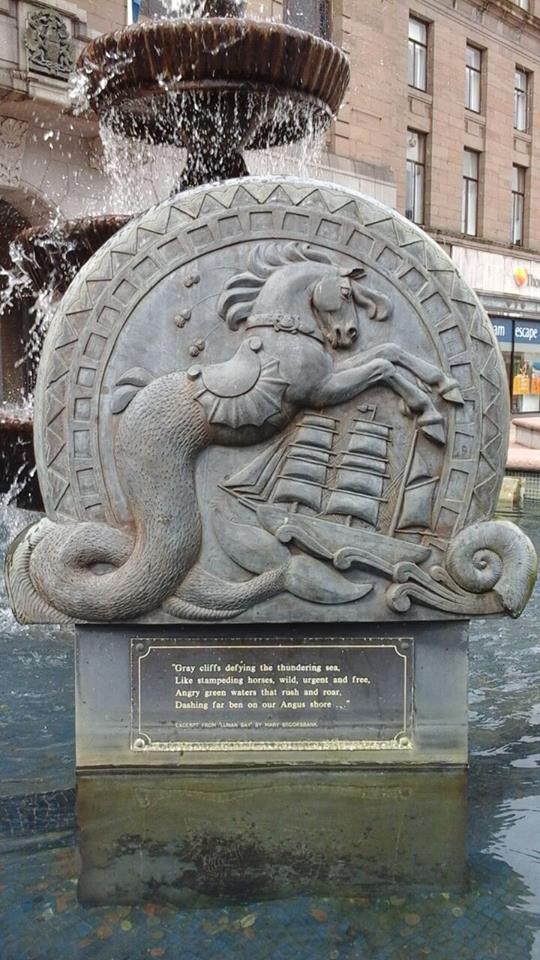 Poetry on the fountains at City Square, photo by Erin Farley

Perhaps most of all, Dundee is reminded of its past by the long, straight lines of bricks and windows, ex-mills which have become homes and offices, but whose presence is a constant echo of the city’s industrial past. The buildings themselves are only one part of what Dundee is – it is the memories and associations they inspire in our minds which shape our living in a city. Writing and performing have always been part of this: the women who worked in these mills pushed back against the relentless claims on their time (twelve-hour shifts at deafening machines with no suggestion this should lessen their duties in the home) by spontaneous strikes where they filled the streets with songs and rhyming games. Poetry and song do not only describe places and the people who live there – they can transform them. And when the buildings, statues and street names of a city so often tell the ‘official’ history of an elite group, creating space in these streets for other voices is an essential part of remembering the past.

3 thoughts on “Poetry, performance and place: a postcard from Dundee”