Our second post on the SGSAH Material Culture programme, ‘The Stuff of Research’, comes from Alexandra Chiriac. Alexandra is a second year PhD candidate at the University of St Andrews, funded through the SGSAH AHRC Doctoral Training Partnership. She is researching the impact of modernism on stage design and interior design in Romania in the 1920s and 30s. She holds an MA in Art History from the Courtauld Institute of Art and has previously worked for Sotheby’s and for GRAD, a non-profit cultural platform for Russian and Eastern European arts. You can find out more about her work at www.alexandrachiriac.wordpress.com.

Did you know that a traditional outfit of the Gwich’in people made of caribou skin is rarer than a Vermeer? A useful conversation starter, and also one of the facts that particularly chimed with my own research during the diverse sessions I attended as part of the Stuff of Research programme. As an art historian who doesn’t study painting or sculpture, I often have to explain why I am researching apparently ‘peripheral’ objects or artists. The idea that there must be a hierarchy of artworks, topped by the oeuvre of one all-powerful genius is old and tenacious, but the developing field of material culture is increasingly coming to the rescue. So I thought it was particularly providential that on my way to one of the workshops I walked up Martin Creed’s Work no. 1059, a piece of art which is also a functional Edinburgh staircase. 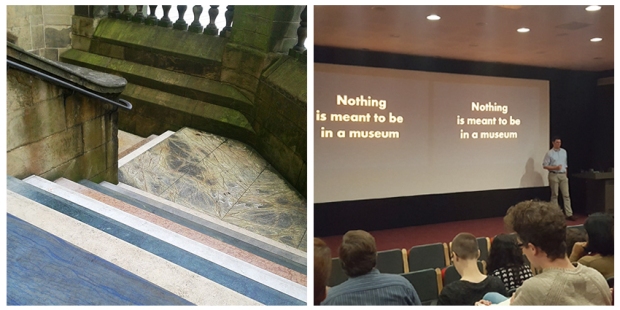 That same day I learned about the craftsmanship of the Gwich’in from Dr Henrietta Lidchi, Keeper of World Cultures at the National Museum of Scotland, our host for one day of the programme. She was one of an array of well-chosen and prestigious speakers who made us question how we approach objects in our research. In my experience, academic learning often lacks hands-on experience, preferring a more theory-based and artist-focused approach. I only really got to grips with paintings as objects after my MA in art history, during stints in an auction house and an art gallery. The Stuff of Research programme thus came at the perfect time for me, as I cast my net wider towards textiles, furniture and other decorative objects. 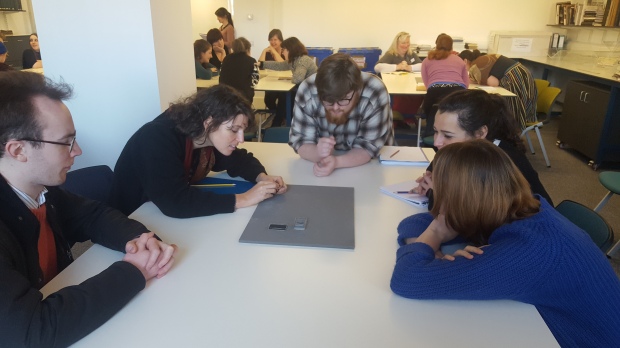 Every new day of workshops brought fun and games, alongside reflection and knowledge, from some group detective work around mystery museum objects to Dr Zoe Laughlin from the Institute of Making demonstrating science with a (slightly illicit) blowtorch! For me, a particular highlight was Dr Frances Robertson’s talk on how advances in the technology of paper and drawing implements have produced changes in the art of draughtsmanship. This sort of ‘bottoms up’ approach to art history demystifies and highlights the materiality of the making process. Similarly, Prof Laurence Grove’s talk about the Comic Invention exhibition revealed that it is possible to break down artificial barriers between ‘good/ bad’ and ‘high/ low’ art even in a museum context. His 2016 exhibition at the Hunterian juxtaposed the work of comic artists such as Frank Quitely with that of Lichtenstein, Warhol, Picasso and Rembrandt. Plus, he shared with us another fun fact: the world’s first comic was published in Glasgow in 1825.

This is the second of two posts on ‘The Stuff of Research’, you can see the other post here. You can also find out a little more about the programme on the SGSAH website, and look out for the symposium that will take place on June 12th!

(Thanks to SGSAH’s John Boyle for the photos in this post.)

2 thoughts on “The Stuff of Research: Putting material culture in practice”