As you’ll have seen from recent posts, we (Lucie, Laura, Catherine, with help from our brilliant co-organiser Roseanne) recently put on a conference. ‘War Through Other Stuff’ ran over three days and was dedicated to exploring alternative histories of conflict – rather than focusing on more conventional military histories, we chose to highlight non-military narratives, artistic interpretations and the material culture of conflict.

The planning for this conference began a year and a half ago, when we realised conflict plays an important role in all of our research, but that we look at it through the ‘other stuff’. As the conference plans developed, it became very important for us to look across time periods, academic fields, countries and gender to bring together the alternative narratives and address them in a broader, non-military context. We realised none of us had ever been to or heard of a conference like this, but if we could draw parallels between First World War fashion, Irish American Civil War songs, and commemorations of the Scottish Wars of Independence, then surely other parallels could be drawn too. Furthermore, we felt that the parameters of our event should go beyond the academic world, and include artists, performers, museum professionals, ex-military personnel and anyone else who felt they had something to contribute. We ended up with an event in which female peacekeepers in medieval Iceland were discussed alongside World War II Christmas dinners, French-Algerian War comics, and military scale-modelling. 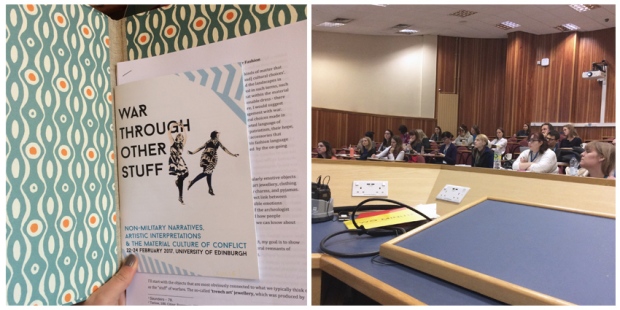 In many ways this was a traditional conference, in which papers were given in lecture theatres and biscuits hurriedly consumed in the breaks. The programme included around 50 speakers, who spoke in parallel sessions, causing much anguish over which sessions to attend. But, through both design and good fortune, there were also a number of things that we felt made our conference slightly unique.

This was a phrase used both by Tony Pollard and Iain Banks during the conference and it nicely demonstrates the departure from the traditional tropes of military history. At WTOS, no one discussed tactics, weapons or the movements of armies but focused instead of the impact of war on art, culture and everyday life.

It is not the norm for a conference even loosely based in military history to be dominated by women, and we were thrilled that of the 90 abstracts submitted, 68% came from women. Of the 55 speakers / performers / poster presenters, 67% were women, 13 of our 16 chairs were women, and the only ‘all male’ event was our keynote, given by Professor Tony Pollard.

Use of social media

It is becoming increasingly common for conferences to use Twitter to disseminate proceedings, and we would certainly recommend this method. Twitter is an incredibly powerful – and free – tool, and was our primary means of promoting our event. We recruited four live-tweeters to ensure that every panel could be shared, using our hashtag #WTOS17. It meant that people could follow even if they couldn’t attend, and we could catch up on the parallel panels that we missed! We purposefully kept a positive and supportive tone on social media, and were thrilled that this tone crossed over into the conference itself.

It was very important to us that the conference was not only attended by people working in academia, and the presence of speakers and attendees from other career paths led to more dynamic and diverse discussions. This may also have contributed to the consistently positive and supportive atmosphere, in which people drew on their own experience to give advice or an alternative perspective, rather than pick holes.

Our evening events (generously sponsored by SGSAH) were also a vital part of the conference programme, taking the discussions out of the lecture theatre and shifting the focus onto arts, performance and heritage. On Wednesday evening we collaborated with local independent cinema Filmhouse to put on a screening of Pan’s Labyrinth. Due to high demand we were moved into the biggest screen at Filmhouse, allowing for an incredibly visceral viewing of Guillermo del Toro’s 2006 film. The film was introduced by Dr David Archibald, an authority on film adaptations of the Spanish Civil War, and followed by a Q&A which was chaired by Roseanne. Whilst we all enjoyed the beauty, creativity and fantasy aspects of Pan’s Labyrinth, which looked amazing on the big screen, it also served as a reminder of the darkness, cruelty and brutality of war. Looking at the ‘other stuff’ doesn’t have to serve as a distraction from the harsh realities of conflict.

On Thursday, following a highly entertaining keynote from Professor Tony Pollard, we headed over to the Museum of Edinburgh for our drinks reception / Museum Late. The aim of this event was to allow our conference attendees, speakers and guests to unwind and network, while enjoying a series of museum based performances and activities – all centred around the ‘stuff’ of war. We wanted to celebrate the power of objects and collections, and highlight the importance of working with arts and heritage organisations to disseminate research outside our academic institutions. A performance from Louise Jordan, from her album ‘No Petticoats Here’, wonderfully demonstrated the power of using music and storytelling to engage people with historical narratives. Performing her songs about women in WW1 in the largest ceramic gallery, Louise had the whole room singing along to her lyrics ‘I was born to be a spinster and by god I’m gonna spin!’

Louise Jordan performs No Petticoats Here at the Museum of Edinburgh

In the other galleries, attendees had the chance to meet curators from three local museums and take a closer look at their collections, a treasure hunt showcased the ‘stuff’ of war in the permanent displays, and Lucie introduced the new costume gallery, which opens with an exhibition of First and Second World War fashion. Ex-army poet Joanne Young gave a moving performance of her poems about women and conflict, and Roseanne played two of her short films, which explore the impact of the First and Second World Wars on life in Shetland. Overall, the event was a wonderful alternative to the traditional conference drinks reception. It required a lot of hard work, funding, support from collaborators and creative thinking, but we all decided it was more than worth it when we saw the galleries flooded with our guests enjoying the programme we had put together.

WTOS treasure hunt in the Museum of Edinburgh galleries

We’d like to thank our funders, SGSAH and the Chalke Valley History Trust for enabling us to run this event. You can catch up on the War Through Other Stuff conference via Storify and Twitter. Thanks to John at SGSAH for the images in this post!

One thought on “Conference Dispatches: Finding War in the Other Stuff”