This guest article comes from Alasdair Grant, who is a second year PhD student in History at the University of Edinburgh, jointly supervised at the University of St Andrews. He is researching Christian-Muslim relations in the late Byzantine world (eastern Mediterranean, 13-15 centuries) through the specific example of people who were taken as captives. For the academic year 2017-18, he is a Visiting Doctoral Researcher at the Johannes Gutenberg-Universität, Mainz.

I am currently sitting at a desk in the Johannes Gutenberg-Universität, Mainz. This city once played host to the Catholic archbishop Elector of Mainz, one of the seven Electors of the Holy Roman Empire, as well as being the hometown of the inventor of the West’s first printing press. The World has just marked five hundred years since Martin Luther sent his Ninety-Five Theses to Albert of Brandenburg, erstwhile Elector of Mainz, and nailed them to the door of All Saints’ Church, Wittenberg—the event commonly understood as the beginning of the Protestant Reformation. It’s to this significant historical backdrop that I’m currently spending a year researching a rather different topic in religious, social and cultural history: Greek Orthodox Christians who were taken captive by Turkish and Arab Muslims in the later Middle Ages.

When I was applying for PhDs, I knew that I wanted to spend some time living somewhere new. As an Aberdeenshire lad (from Meikle Wartle, no less!) who has otherwise spent his life so far in cotton-wool-insulated St Andrews, Oxford and Edinburgh (more specifically, Morningside…), I felt it was time for the challenge of a new culture and language. My (then prospective) lead supervisor at Edinburgh, Prof Niels Gaul, suggested that I should investigate the University of Mainz, where the professor of Byzantine Studies, Johannes Pahlitzsch, is an expert on Christian-Muslim relations. Not only that, he has in fact published the only two articles I am aware of specifically related to my doctoral topic. I was absolutely delighted when SGSAH informed me that they would support me for an academic year as a Visiting Doctoral Researcher (VDR) here in Mainz, and I am convinced that it will continue to be one of the most important formative periods of my personal and academic development.

Adding to the above list of the rather genteel places I’ve had the privilege to call home so far, I now live just across the Rhine from Mainz in the beautiful state-capital of Hessen, Wiesbaden (it’s maybe even more posh than Morningside). Besides the leafy parks and elegant architecture, I’m in striking-distance of both Mainz and Frankfurt, which means the opportunity of (theoretically) up to three operas and several organ recitals each week. Germany’s public investment in the arts is one of its greatest assets, especially for a music-lover like me. 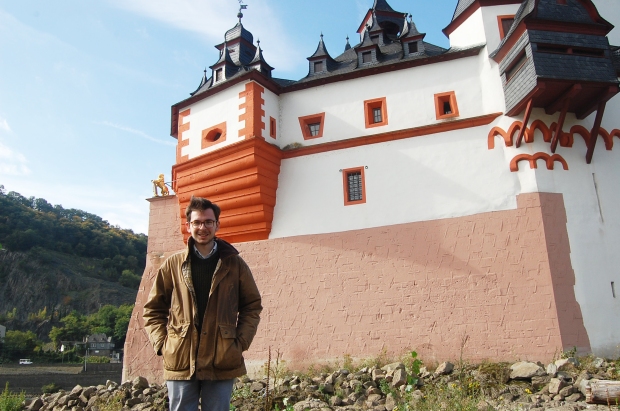 Me on a day out up the Rhine, at Burg Pfalzgrafenstein, Kaub

The University of Mainz is an unpretentious institution with high academic standards. It dates back to a fifteenth-century endowment, but is now housed in a post-War campus in the west of the city. Here, I have access to a specific Byzantine Studies library; something I have never encountered in the UK. I am also taking German classes, and a class in medieval Arabic literature (taught in German!). These resources, and strengths in teaching, are complemented by a range of research seminars that attract leading scholars in the field. I have been made to feel very welcome here by Prof Pahlitzsch, his assistant Dr Zachary Chitwood (from America), and their students.

Meanwhile, the steady grind of PhD research carries on. I look forward to a year pretty much unencumbered by responsibilities, devoted to developing language skills and undertaking thesis research. I hope also to make use of my central location to visit manuscript and archival collections in Europe, especially Italy, in my search for new source material. I am equally delighted and surprised already to have tripled my source base with new manuscript discoveries since my arrival here: long may it continue. 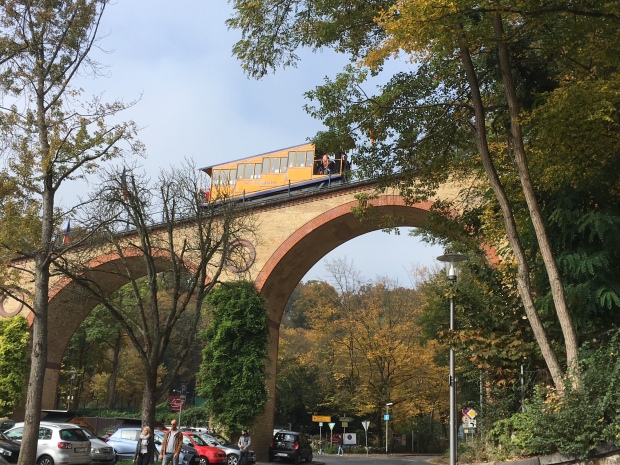 The Nerobergbahn, a water-propelled funicular railway in northwest Wiesbaden

If you are a PhD student funded by AHRC DTP, I cannot recommend the VDR scheme enough: it gives you an opportunity to experience another country, another academic culture, and another supervisor, who might just be the world-leading expert on your topic. Just make sure you’re ready for plenty of heavy bread, carbonated water, and shops that actually close on Sundays if you come to Germany.

We are always seeking new guest bloggers! If you have an idea for a blog post or would like to informally discuss writing for the SGSAH blog please get in touch with Joanna via email at joanna.rodgers@uhi.ac.uk, or connect with the blog on Twitter