John David Minto is a 2nd year PhD candidate in English Literature based at the University of Dundee. His research adopts an existential approach to the concept of cultural well-being with a focus on everyday aesthetics and the related aesthetic theory of two seemingly dissimilar thinkers: William Morris and Martin Heidegger.

The summer of 2018 will be remembered as the time of all things Morris. I received funding from the SGSAH Student Development Fund to undertake a research trip to London for six weeks where I would also be speaking and volunteering at heritage properties related to William Morris, including The William Morris Society (WM Trust) The Emery Walker House (EW Trust), and The Red House (National Trust).

Red House, Bexleyheath, Southeast London, commissioned by William Morris, designed by Philip Webb (1859-60), described by DG Rossetti as ‘more of a poem than a house’.

The original idea was to improve my presentation skills and the dissemination of philosophical ideas, especially which regard to public engagement (well … it said that on the Vitae Researcher Development Framework form, anyway), which anyone who has read continental philosophy will attest is easier said than done. The other issue is my somewhat crippling social anxiety and fear of presenting my research in either an academic or public setting – anywhere there are people really! I have always been of the opinion, however, to improve on something that you cannot find the motivation or inclination to do, it is perhaps beast to throw yourself in the deep end. In my time at these organisations, this not only worked but surpassed all my expectations, and not to sound too cliché it afforded a clarity and confidence sorely lacking.

This is only part of the story, however. I had now had six weeks to fill! I should take this moment to apologise to my (long-suffering) wife whose birthday I was away for as well as our anniversary, although this was clearly unavoidable. In this time, I helped with cataloguing at the William Morris Society and Emery Walker House, where to my delight I was able to handle many books from the Kelmscott Press. I also researched and wrote labels for a nineteenth-century photograph and printing exhibition at the former and acted as a steward to the knowledgeable guides at the latter. I have to say, the hospitality and support of all the staff and volunteers was as friendly as it was professional, and I encourage all to make use of such-like organisations. The highlight was an evening of drinking wine in Emery Walker’s garden, which is on Hammersmith Terrace overlooking the Thames, undeterred, during a thunderstorm. The tradition of arts and crafts in Hammersmith lives on with these organisations, and anyone interested in such related fields of interest should support them by making a visit.

The Story of the Glittering Plain or the Land of Living Men by William Morris, produced by The Kelmscott Press (1890), with illustrations by Sir Edward Burne-Jones.

I now only have a few days left of my trip, and as I sit typing this blog, reflecting upon my time, it was certainly worth it to be able to take time out. To return to the cliché once more, as a researcher entering the dreaded two-year period of study, it was heartening to not only take stock of my work by means of engagement with other like-minded souls, but also to be involved with life beyond the academy. I am a quite unsure of a future academic life, which may perhaps seem strange to some (and myself), but there are other options available as I have discovered here. The ideal of working with people and communities to further art and society is perhaps the influence of a certain craftsman speaking – ‘an art made by the people, and for the people, as a happiness to the maker and the user’ – although it is organisations like these that keep this dream alive and make a much-needed link between everyday and academic life. 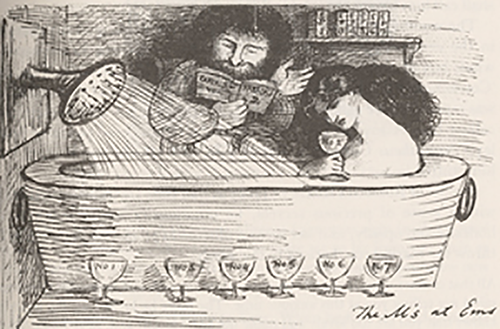 The M’s at Ems by DG Rossetti, which portrays William Morris reading from the Earthly Paradise to his, somewhat, suffering wife as she bathes in water and wine.

We are always seeking new guest bloggers! If you have an idea for a blog post or would like to informally discuss writing for the SGSAH blog please get in touch with Brittnee via email at b.leysen.1@research.gla.ac.uk or connect with the blog on Twitter