This guest blog comes from Rhona Ramsay, who is in her first year of a SGSAH-funded PhD at Stirling University researching the material culture of Gypsy/Travellers in Scottish Museums.

My PhD research looks at Nacken chatterie in Scottish museums. Nacken is a word used by many Gypsy Travellers in Scotland to describe themselves and chatterie is the Cant (Nacken language) word for ‘things’.  As Gypsy/Traveller ethnicity is self-defined, I have tried to use the terminology that the groups or individuals mentioned use to define themselves.  A fuller note on the terminology in this article can be found at the end. [i]  Although the focus of my research is fairly narrow, it is important to place it within the context of Nacken history, contribution, and contemporary issues faced by the community.  This month I was struck by two contrasting events that brought into focus the prejudices and discrimination that Gypsy Travellers have faced both in the past and today.

At the end of July this year three young Travellers from Scotland travelled to Kraków to take part in a project called Dikh He N Bister (‘Look and don’t forget’).  This project called on the young people involved to remember the Roma genocide, known to some as the Porajmos (‘the Devouring’), commemorated on 2 August.  This marks the day in 1944 when the Zigeunerlager (Gypsy Family Camp) at Auschwitz was liquidated.  On that one day nearly 3,000 Roma and Sinti were sent to the gas chambers, joining around 17,000 of their people who had already been exterminated there since the first Roma arrived in February 1943.  It is estimated that between 200,000 and 500,000 European Roma and Sinti were murdered or died of starvation or disease during the Porajmos, although some believe the figure to be higher.[ii]  Dikh He N Bister sought to raise awareness of the persecution and prejudice faced by Gypsies, Roma and Travellers both in the past and today.[iii]  One of the Scottish Travellers involved has spoken about his plans to help tackle contemporary misunderstandings about and prejudice against Nackens through raising awareness in schools about the Porajmos, and addressing ongoing discrimination faced by the community.[iv] 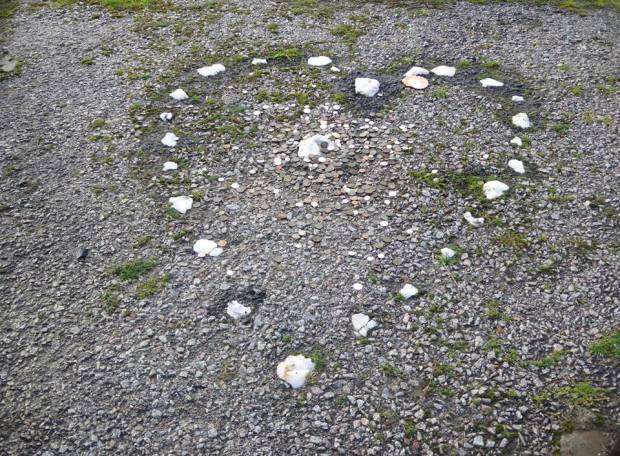 The Tinkers’ Heart in Argyll was scheduled as an ancient monument in 2015 (Picture: copyright Jenny Noble)

Last week the continued need for such initiatives has been brought to public attention in Scotland.  Most of the discrimination and prejudice faced daily by Nackens goes un-reported and un-seen, but on Wednesday 23 August a video interview with Douglas Ross, Conservative MP for Moray, which had been recorded in June, was broadcast by an online video company.  Asked ‘If you were Prime Minister for a day, without any repercussions, what would you do?’  Ross answered, ‘I’d like to see tougher enforcement against Gypsy/Travellers’. This answer demonstrated a shocking lack of understanding about this community: Gypsy Travellers, or Nackens are a minority ethnic group and not a behaviour which can be ‘enforc[ed] against’. Ross’s blanket condemnation of the entire ethnic group was a public expression of prejudice and lack of understanding still faced by Nackens in Scotland.  Later that day Ross sought to clarify what he meant by this comment, tweeting that he wished to see tougher enforcement against Gypsy/Travellers who ‘flout local planning procedures with illegal encampments as we have seen in Moray many times’.  As Patrick Harvie of the Scottish Green Party tweeted in response, this is poor justification considering that Moray Council provides no culturally appropriate sites for Gypsy/Travellers.[v]

It has been heartening to note that Ross’s comments were quickly condemned not only by the Scottish Green Party, but also by the SNP and Scottish Labour, as well as organisations including Article 12 and Amnesty International, and by individuals via social media.  I was particularly encouraged by a comment that the ‘Gypsy Traveller community are part of Scotland’s rich cultural heritage’.[vi]  I would add that Nackens themselves have a rich and living cultural heritage to be acknowledged and celebrated.  The possibilities presented by cultural heritage as a tool for contemporary change is, in part, what lies behind the Dikh He N Bister project. It is also expressed in a wealth of other Nacken exhibitions, events and campaigns, including Hidden Treasures, a celebration of Nacken art (www.hidden-treasures.org.uk/), Moving Minds, a touring exhibition, and Jess Smith’s successful campaign to have the Tinkers’ Heart scheduled as an ancient monument by Historic Scotland (now Historic Environment Scotland), and subsequent projects (www.heartofthetravellers.scot/).  The Moving Minds exhibition combines contemporary life experiences of, and objects that mean something to, the Nackens who developed the exhibition.  The objects often connect in some way with, and communicate elements of, their cultural heritage.[vii]  The Tinkers’ Heart, as Jess Smith states, proclaims ‘an undeniable fact: [Nackens] have been here a long time and seen a lot of history’.[viii]  More importantly she sees it as having a role now and in the future as an intercultural meeting point, ‘a place of both of ancestors and descendants; where the past, the present and the future merge.’[ix]

I am so grateful to all the Nackens I have had the pleasure of encountering through my research and previous work in museums, for the generosity with which they have always shared their culture.

[i] I use a variety of terminology within this blog post.  Nacken is a word used by many Gypsy/Travellers in Scotland to describe themselves, and chatterie is the Cant (Nacken language) word for things.  In Scotland, the legal term Gypsy/Travellers refers to distinct groups, including Romany Gypsies, Scottish and Irish Travellers – who regard the travelling lifestyle as being part of their ethnic identity.  In some parts of Europe, and among many Roma and Sinti communities ‘Gypsy’ is considered a pejorative term, and so when referring to these groups this term has been avoided.  Likewise, not all of those legally considered to be Gypsy/Travellers in Scotland would use this term, some preferring Nacken, Gypsy Traveller, or Scottish Traveller.  As Gypsy/Traveller ethnicity is self-defined, I have tried to use the terminology that the groups or individuals mentioned use to define themselves.  Porajmos and Dikh He N Bister are Roma words and terms.

[ii] Much is still unknown about the number of people killed as a result of the Porajmos, but a useful publication that looks at this and other issues, The Genocide and Persecution of Roma and Sinti: Bibliography and Historiographical Review, is available here: http://www.holocaustremembrance.com/sites/default/files/bibliography_and_historiographical_review.pdf

[iii] Neither Scotland, nor any other country in the British Isles is listed among those with populations that were directly affected by the Porajmos, but Nackens have been far from immune to extreme forms of persecution.  In 1603 the Privy Council of Scotland ordered Gypsies to leave Scotland, never to return on pain of death, which meant that you could be hanged purely for being a Nacken.  According to Sheila Stewart this law was not revoked until the death penalty was ended.  The community has also been subjected to the forced removal of children, assimilation programmes, cultural and linguistic oppression and alienation from traditional lands.  An account of many of these experiences can be found in Jess Smith’s Way of the Wanderers: the Story of Travellers in Scotland.

[v] A report on the Accommodation Needs Assessment of Gypsies/Travellers in Grampian by Craigforth Consultancy in 2008 highlighted the need for 23 pitches for Gypsy Travellers in Moray.  This has not yet been actioned by Moray Council:https://www.aberdeencity.gov.uk/web/files/CouncilHousing/LHSAppendix27.pdf

[vi] Comment from an SNP spokesperson quoted here and elsewhere:

[vii] This exhibition was developed by Nackens who work with the Minority Ethnic Carers of People Project (MECOPP), and has been touring Scotland over the last three years.  Moving Minds has been shown in museums including Auchindrain Township Museum, the Highland Folk Museum, Inverness Museum and Art Gallery and the Museum of Edinburgh.  It has also appeared at the Just Festival in Edinburgh in 2015.

[viii] Smith, J. (2012), Way of the Wanderers: the Story of Travellers in Scotland.  Edinburgh: Birlinn

[ix] Heart of the Travellers website, Welcome to the Tinkers’ Heart, A Message from the Heart: http://www.heartofthetravellers.scot/

3 thoughts on “Meeting at the Heart: an alternative to hate and intolerance”